The Dodd-Frank Wall Street Reform and Consumer Protection Act was signed into federal law by President Barack Obama on July 21, 2010.  This act promotes financial stability for the US by making the financial system more transparent and accountable. But what does this have to do with the so called Conflict Minerals?  As it pertains to Conflict Minerals this act intends to stop funding of armed groups that illegally extract this minerals from the Congo region in Africa.   These groups use proceeds from the sales of these minerals to promote conflict, violence and criminal behavior in the area.

The Dodd-Frank Act does not prohibit the use of Conflict Minerals. At this point it simply requires publicly traded companies that use these minerals to understand where they are being sourced, and more importantly to examine if these minerals are essential to their manufacturing process. It possible it challenges companies to identify whether or not these minerals are funding armed groups.  Companies have to report to the SEC and publish on their website if the products they manufacture contain conflict minerals or not.

So which are the so called Conflict Minerals?  Those identified in the Dodd-Frank Act are Casserite, Wolframite, Coltan and Gold.  Also included are their derivatives: Tin, Tungsten, and Tantalum.   The area in question in the Congo Region, which other than the Democratic Republic of the Congo includes the adjacent countries of Sudan, Rwanda, Burundi, Tanzania, Uganda, Angola and the Central African Republic.  In the Act they are referred to as “covered countries”.  See the map below. 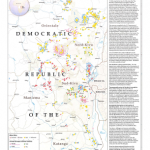 For more information on conflict minerals please visit the following links on the SEC website.

Companies are required to have their first report for the 2013 calendar year on Conflict Minerals by May 31, 2014.

Comment0 | Share | Tweet | Share | Pin It | print | email
Category: Industry News
Disclosure of Material Connection: Some of the links in the post above are “affiliate links.” This means if you click on the link and purchase the item, we will receive an affiliate commission. Regardless, we only recommend products or services we use personally and believe will add value to our readers. I am disclosing this in accordance with the Federal Trade Commission’s 16 CFR, Part 255: “Guides Concerning the Use of Endorsements and Testimonials in Advertising.”