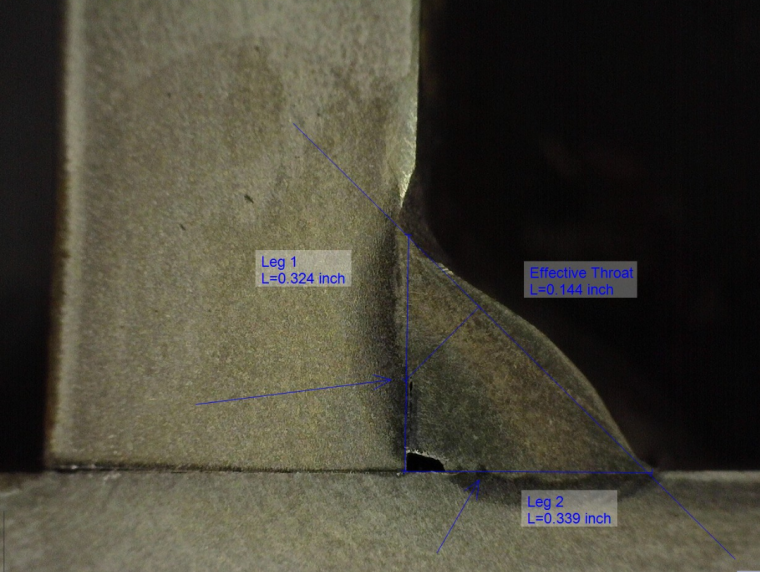 Macro etch tests are commonly done as part of qualification tests for welders and welding procedures. This test is relatively easy to do and does not require complex or expensive equipment.  However, very few fabricators ever perform this test.

A macro etch test can serve as verification that a change on how something is welded is still providing a sound weld.  How a weld looks from the outside can be an indication of quality, but assuming the exterior appearance tells all is a big mistake.  Plenty of beautiful welds have lack of fusion.

Just recently we conducted a survey for a potential customer.  We noticed that a print for a weldment called for an 1/8” fillet weld joining a 3-inch diameter boss with 1/2-inch wall thickness to a 1/4-inch thick plate.  This was being welded robotically.  However, the fillet weld being made by the robot was not 1/8-inch; it was 1/4-inch.

This part was being overwelded by 300%!  This meant that if they stuck to the size called for by the print they would reduce welding time by 75%. When asked why they were not putting down 1/8-inch fillet welds they mentioned being afraid of not getting fusion with such a small weld.  For the past 3 years they had been overwelding because they weren’t sure if that very small 1/8-inch fillet weld could fuse to the root.  A simple macro etch test could verify that.  Since they were using a robot, it would be expected that if they get the penetration they need once, they will always get it due to the repeatability of the robot.

The green line shows the effective throat of the fillet weld.

As you can see they were getting not just fusion but very deep penetration.  The image shows the effective throat (green line) having a dimension of 0.209 inches.  The engineering drawing required a 1/8-inch fillet weld with fusion to the root, meaning that the necessary throat only had to be 0.088 inches.  The current weld is providing more than double the throat which means more than double the load carrying capacity.  So this is not bad.  Except for using four times the amount of weld metal necessary and taking four times as long to weld.

We then mocked up this joint.  Slightly different configuration but close enough to give us a good idea of whether or not we could achieve root fusion with a much smaller weld.   This was the result…

The green line shows the effective throat of the fillet weld.

Much to the surprise of our customer this weld achieved a significant amount of root penetration.  The penetration was so deep that the dimension of the throat ended up being 0.246 inches.  The weld size was not quite 1/8-inch; it was roughly 3/16-inch.  Still, this would represent a 25% reduction of weld metal.  The wonderful thing was that no strength was lost.  This weld, due to a larger effective throat, had 18% higher load carrying capacity than the bigger ¼-inch fillet weld.

This simple macro etch test provided the fabricator with proof that a better welding procedure could provide a smaller weld and higher strength.  The procedure was later implemented.  The new welding procedure specification (WPS) was written as an AWS D1.1 prequalified welding procedure based on the instructions in Qualification of Welding Procedures, Welders and Welding Operators.  However, due to the sensitive nature of this joint a full procedure qualification test was conducted according Clause 4 of AWS D1.1.

The end result was a savings of 25% in filler metal, gases and welding time and an increase in strength.  The reduction of approximately 25% in welding time resulted in a total cycle time reduction of 9%. This added capacity was worth tens of thousands of dollars per year to this fabricator.  All of this facilitated by a simple macro etch test.

If you are looking to do macro etch testing of your welds all you need is the following:

Maybe it’s time you looked inside some of your welds and improve quality and productivity.  If you have any questions on performing macro etch please just let us know.

Comment1 | Share | Tweet | Share | Pin It | print | email
Categories: Cost Reduction, Qualification, Testing and Inspection, Welding Costs
Disclosure of Material Connection: Some of the links in the post above are “affiliate links.” This means if you click on the link and purchase the item, we will receive an affiliate commission. Regardless, we only recommend products or services we use personally and believe will add value to our readers. I am disclosing this in accordance with the Federal Trade Commission’s 16 CFR, Part 255: “Guides Concerning the Use of Endorsements and Testimonials in Advertising.”

One thought on “Importance of Macro Etch Testing of Welds”