When qualifying a welding procedure specification (WPS) for  fillet welds per Clause 4 of AWS D1.1 Structural Welding Code you must only perform a single test.  You must do macroetches in three locations as shown below. 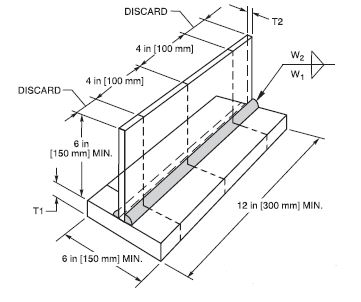 It is assumed that if we can show root fusion at these three locations that our welding procedure is acceptable.  Meaning it is capable of producing good welds.

However, when doing a welder performance qualification there is a difference in the test.  The welder must stop at the middle of the test coupon, do a restart and finish out the weld.  Instead of three macroetches only two are taken, each 2 inches from each end.  The middle section of the coupon is then subjected to the fillet break test.  The image below shows the location of the macroetches and the stop/restart. 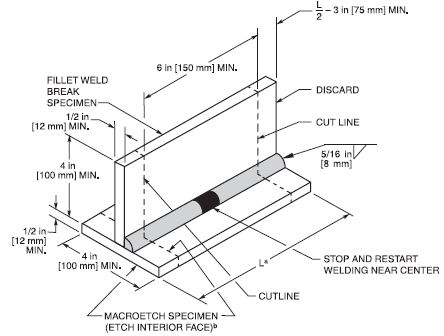 A stop and restart near the middle of the weld is a requirement for the welder performance qualification test.

A macro etch gives us a clear indication of whether or not we achieved root fusion. Root fusion shall be achieved per AWS D1.1 in order for the welder to be qualified. This should be shown on both macroetches as seen below.

Macroetches show whether or not root fusion was achieve. it also provides details such as depth of root penetration, penetration depth onto the side walls, area affected by the heat (HAZ), size of legs, effective throat and more.

It is not necessary to use a camera that provides magnification as the one used for the images above, but it can help if achieving root fusion was in question.  The red lines are added to clearly show the root of the joint (intersection of the red lines).  Macroetches provide a lot of useful information, but they only provide information on single location of the weld.  Move half an inch and the results may be different.

Since these macroetches are taken two inches from the start and two inches from the end we get reasonable assurance that the welder was able to maintain adequate travel speed, transverse and travel angles, steady contact tip to work distance and good technique.

The fillet break test is done to assure that there is fusion to the root at the start and stop done in the middle of the weld as well as throughout the weld rather than a single location.  This can be a problem for some welders. The fillet break test is done by placing the root of the weld under tension. This can be done on a press or by placing the test coupon on a vice and delivering a few hammer blows as seen below. 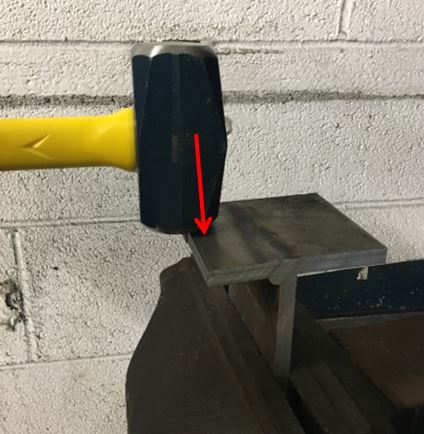 When performing this test make sure that there are not tack welds on the other side of joint. Tack welds must always be placed near the ends of the coupon.

If the plates break off it does not mean that the test failed. This is a common misconception. Whether the pieces separate or just bend the surfaces must be examined. If you can see the root (the straight edge of the vertical piece) the welder fails. 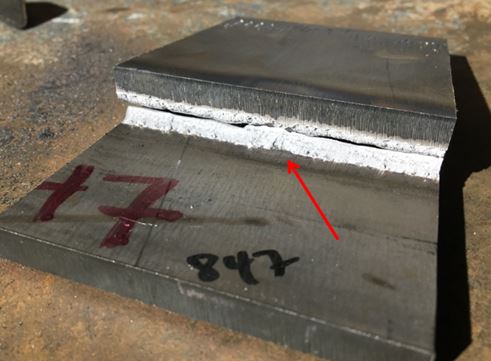 Fillet break tests reveal whether the welder was able to achieve root fusion over a section of joint rather than a single spot.

The arrow indicates the stop and restart.  Notice the jagged edge on the top piece. This is indicative that root fusion was achieved throughout the joint. 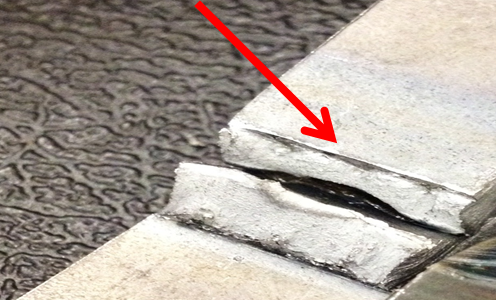 The arrow points to the root of the joint. Being able to see the edge of the top piece is indicative of lack of root fusion.

The above image shows what lack of root fusion would look like.  Notice the straight edge.

Prior to performing the macroetch and the fillet break tests the weld must pass visual inspection. Acceptance criteria are provided in Clause 4 of AWS D1.1. Similarly, other codes and standards will provide their own acceptance criteria.

The fillet break test is more often than not failed not as a result of poor skill by the welder, but by a welding procedure that is poorly developed.  If the amperage is not high enough you may not always get root fusion. 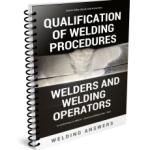 Do you want more information on how you can perform  your own welder and welding procedure qualifications?

“Qualification of Welding Procedures, Welders and Welding Operators” is a guide developed to help you perform your own qualifications in full compliance to AWS D1.1 Structural Welding Code (Steel).

Comment0 | Share | Tweet | Share | Pin It | print | email
Category: Uncategorized
Disclosure of Material Connection: Some of the links in the post above are “affiliate links.” This means if you click on the link and purchase the item, we will receive an affiliate commission. Regardless, we only recommend products or services we use personally and believe will add value to our readers. I am disclosing this in accordance with the Federal Trade Commission’s 16 CFR, Part 255: “Guides Concerning the Use of Endorsements and Testimonials in Advertising.” 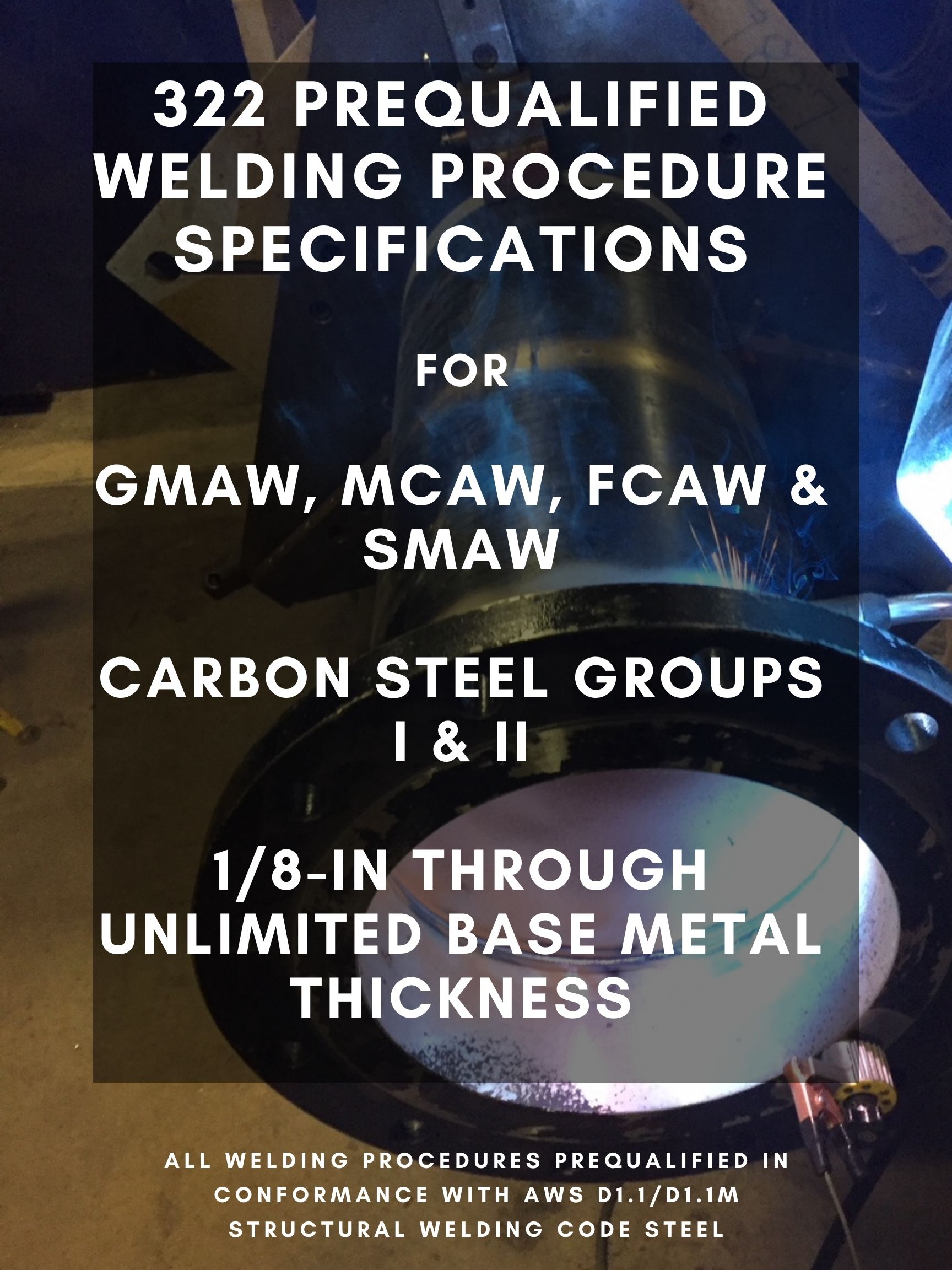