When it comes to fillet welds, bigger is not always better.  A fillet weld is easy to measure, simply take out your fillet weld gauges measure it.  However, there is an incorrect assumption that a bigger weld (as measured with a fillet gauge) is always stronger than a smaller weld.

Before we get into this explanation lets first understand what we mean by stronger.  The strength of the weld determines how much load it can carry.  If you are using AWS D1.1,  you will see that to determine the size and length of weld you will need to know the allowable stress on the weld and the force acting upon that weld.  For now, just know that a stronger weld can carry a heavier load.

The reason why a bigger fillet weld (as measured by its legs) is not necessarily stronger than a smaller weld is because penetration to the root is a determinant factor in the effective size of a weld, or in the case of fillet welds, the effective throat of a weld.   So a smaller weld can be stronger.  However, there are two other reasons why a smaller weld is better: lower cost and less distortion.  Many issues with distortion are solved by making the smallest weld allowed by the design or by the code governing the work.

Below is a poster published by The Lincoln Electric Company showing the parts of a fillet weld.  You can download this poster and many others for free at their website. 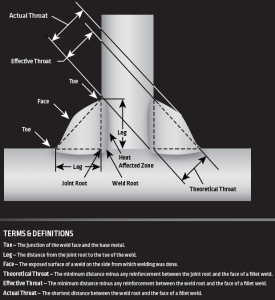 Parts of a fillet weld – Courtesy of Lincoln Electric

The strength of the weld is determined by the filler metal used and its effective area. The effective area of a weld is determined by multiplying the length of the weld times the throat.   So the bigger the throat the larger the effective area and thus the stronger the weld.  It is important to note that some codes, such as AWS D1.1 don’t give you  “credit” for penetration beyond the root. But if you are creating your own standards and doing your own design you can certainly take advantage of depth of root penetration to reduce your weld sizes and your costs.

As you can see, the effective throat of the larger weld is only 0.145” while the smaller weld has an effective throat of 0.183.” The weave done on the first weld looked good on the outside, but the technique used did not allow for fusion to the vertical member all the way down to the root of the joint.  Mill scale can sometimes create this problem as well.

We’ll spare you some of the design details, but let’s take a look at the magnitude of forces these welds can carry.  We’ll assume a total length of 20 inches of weld done with an ER70S-6 wire.  The allowable shear stress on the weld using acceptable design principles is 30% of the ultimate tensile strength of the electrode.  In this case that would be 30% of 70ksi or 21ksi.  The formula to determine weld size goes as follows:

Now we can determine the maximum allowable force that each weld can carry as follows:

So our much smaller weld can actually carry 26.2% more load than the smaller one!  Of course, if the first (bigger) weld had achieved root fusion it would be stronger.  But this is why we cannot assume that a weld is stronger simply by measuring leg size. This also shows the importance of a good welding procedure and welder skill.

Comment5 | Share | Tweet | Share | Pin It | print | email
Categories: Cost Reduction, Testing and Inspection, Theory and Education, Welding Costs
Disclosure of Material Connection: Some of the links in the post above are “affiliate links.” This means if you click on the link and purchase the item, we will receive an affiliate commission. Regardless, we only recommend products or services we use personally and believe will add value to our readers. I am disclosing this in accordance with the Federal Trade Commission’s 16 CFR, Part 255: “Guides Concerning the Use of Endorsements and Testimonials in Advertising.”

5 thoughts on “Bigger (Weld) Is Not Always Better”