Silicon islands form on the surface of the weld. Some filler metals are designed to move these islands towards the middle of the weld and way from the toes. This in turn facilitates their removal.

First of all, silicon islands are not the same as the slag from processes such as FCAW (flux-core) and SMAW (stick).  Silicon islands do not need to be removed prior to applying a second pass as you would slag from a slag-producing welding processes. Welding over silicon islands will not result in inclusions.  However, we typically try to minimize silicon islands if the parts will be painted. This is why manufacturers of filler metals spend a lot of time and resources developing wires that will control the formation and more importantly the location of these islands. Wires with good “silicon island management” will produce silicon islands towards the center of the weld rather than the toes.  Silicon islands in the center will detach easily while those that form in and around the toes of weld will be hard to remove.

We recently had a project in which we switch our customer from an ER70S-6 mig wire to an E70C-6M metal-core wire and completely eliminated silica formation in the weld.  In doing so, we considered factors other than just the filler metal.  Below are 5 factors that contribute to the formation of silicon islands. 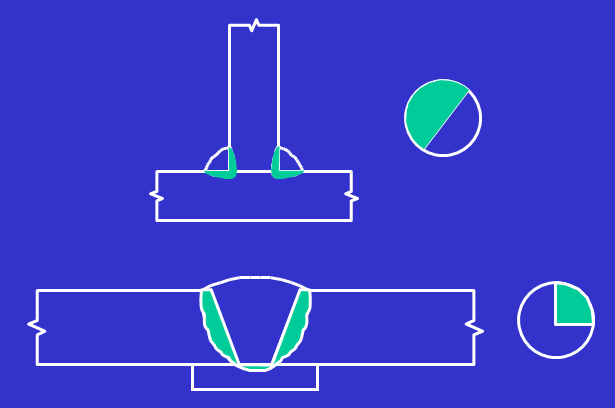 Different joints will have different levels of admixture (the mixing of weld metal with base metal) . The higher the admixture the more silicon islands will form on the surface of the weld.

There is a higher percentage of admixture in the fillet weld (about 50%) than the groove weld. If you have an extremely tight groove you will have a higher percentage of admixture as well.  The more the base metal gets driven into the weld metal (admixture) the more impurities will be driven to the surface of the weld in the form of silicon islands.

The chart below is for Lincoln Electric’s Metalshield MC-6 (E70C-6M).  Notice the maximum for both silicon and manganese are lower than for the ER70S-6 shown above.  This means that a solid wire has the ability to produce more silica than metalcore.  However, this is typically not the case due to other factors.

The above 5 factors are not all that can contribute to the amount of silicon island formation in welds.  However, these tend to be the most influential by far.

Comment1 | Share | Tweet | Share | Pin It | print | email
Categories: Processes, Theory and Education
Disclosure of Material Connection: Some of the links in the post above are “affiliate links.” This means if you click on the link and purchase the item, we will receive an affiliate commission. Regardless, we only recommend products or services we use personally and believe will add value to our readers. I am disclosing this in accordance with the Federal Trade Commission’s 16 CFR, Part 255: “Guides Concerning the Use of Endorsements and Testimonials in Advertising.”